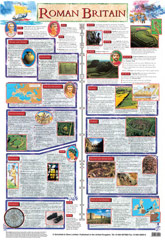 View Larger Image
Availability:
Available to buy today
Retail Price:
£ 10.00 Are you a teacher or tutor? (Show teacher price)
In stock
Safe and secure shopping
Free delivery on all UK orders over £30

The 'Roman Britain' poster features a central timeline which spans from AD 43 - AD 410. Maps indicate the area of the Roman Empire in the 1st and 2nd centuries, and the invasion of Britain at the end of the Roman Empire. Information is organised into the topics: work and trade; language; the Pax Romana; entertainment; religion; evidence; roads; towns; houses and home life; end of the empire. Photographs of the Roman baths at Bath and Hadrian's Wall help children to understand the legacy of Roman Britain, whilst images of a Cirencester mosaic and a Latin inscription on a tomb in York provide exciting evidence of the period.

There are no product reviews, why not be the first to write a review for this product?

Sign up to our monthly newsletter for news and offers.

You can order a product catalogue from us free of charge.

Download a range of extra resources to use in your school.