Map of The Roman Empire Poster 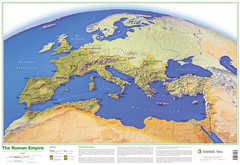 View Larger Image
Availability:
Available Now
Retail Price:
£ 10.00 Are you a teacher or tutor? (Show teacher price)
In stock
Safe and secure shopping
Free delivery on all UK orders over £30

This map shows the Roman Empire as it was in AD 106, in the reign of the Emperor Trajan, and illustrates the physical setting that greatly influenced how the Roman Empire grew. The map indicates provincial boundaries, Roman roads and Roman walls, and a description beneath the map explains how and why the empire expanded in the directions shown.

There are no product reviews, why not be the first to write a review for this product?

Sign up to our monthly newsletter for news and offers.

You can order a product catalogue from us free of charge.

Download a range of extra resources to use in your school.