skip to main content
Free UK delivery on all orders over £30
Reduced prices for teachers and tutors
Home » About us » Blog » The Complete Primary Dictionary: the first and last word in primary dictionaries

The Complete Primary Dictionary: the first and last word in primary dictionaries 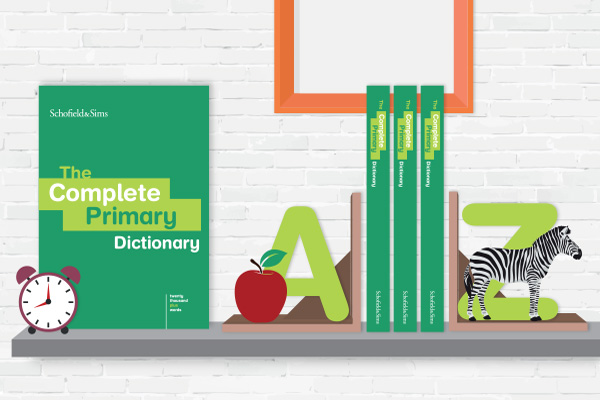 Last month saw the publication of our long-awaited Complete Primary Dictionary, a five-year labour of love, and one of the first completely new dictionaries of the twenty-first century.

While this last claim may sound like a bit of an overstatement, the reality is that few publishers are prepared to invest the time and money required to create a new dictionary from scratch, with the result that most dictionaries are simply revised editions of existing word lists. This, coupled with the fact that it has been written specifically for children in Key Stage 2, is what makes The Complete Primary Dictionary so special.

The Complete Primary Dictionary is the brainchild of Michael Janes, an experienced lexicographer, who, frustrated with the quality of existing Key Stage 2 dictionaries, wanted to set a new standard in dictionaries for this age group. Before starting work on the new dictionary, Michael carried out a detailed review of the primary dictionaries currently available in order to identify specific weaknesses that The Complete Primary Dictionary might address. Two key areas for improvement stood out. Firstly, definitions tended to be written in language that was inaccessible (especially to pupils in lower Key Stage 2), with not enough specific information to help children understand the word in question. Secondly, definitions were often woolly, failing to articulate all the different senses of a word that were appropriate to the age group.

Michael sought to address the problem of inaccessible and intimidating descriptions found in other dictionaries by writing clear and precise definitions in the sort of language that children from the age of seven onwards would find easy-to-read, interesting and friendly. To this end, each definition in The Complete Primary Dictionary is written in a restricted vocabulary of specially-selected, high-frequency words that children will be familiar with, known as a ‘defining vocabulary’ (an underlying principle that goes back to Samuel Johnson's theory that words should be defined using ‘terms less abstruse than that which is to be explained’). There is also a distinct avoidance of ‘dictionaryese’ (the type of abbreviated, elliptical language you often see in traditional dictionaries) and circular definitions (e.g. ‘fat’ defined as ‘not thin’ and ‘thin’ defined as ‘not fat’; or ‘to begin’ defined as ‘to start’ and ‘to start’ defined as ‘to begin’).

To ensure complete coverage of the language used at Key Stage 2 and to avoid patronising children, Michael determined to give each entry as full a treatment as possible. As a result, The Complete Primary Dictionary not only features more headwords than rivals, but also includes more definitions of headwords and more examples. In addition, a great deal of effort has gone into ensuring that each definition provides enough specific information to enable children to understand the word in question fully. For example, a rosette is defined as: ‘A decoration shaped like the flower of a rose and made out of cloth, usually with two ribbons hanging down from it. It is often given to someone who has won a prize or worn by someone to show that they support a team or group’. A similar level of care and attention can be seen in the choice of examples provided throughout the dictionary to illustrate different usages or grammatical functions.

Besides attaching greater importance to the quality and breadth of the definitions than rival dictionaries, The Complete Primary Dictionary also places more emphasis on word and letter origins. ‘Origin panels’ at the start of each letter section give children a fascinating insight into the history of the alphabet, informing them that, for example, the letter M comes from a symbol or picture representing a wave or that the letter R can be traced back to a representation of the human head. There are also detailed etymologies for more than 750 entries, illustrating just some of the ways that different words have come to be absorbed into our language, whether derived from an underlying Latin or Greek word, imported from foreign languages such as French or Hindi, or simply thanks to the influence of a particular individual or place.

Other more specific features that users of The Complete Primary Dictionary may find useful include:

Featuring more than 75,000 words, definitions and examples, The Complete Primary Dictionary really is as comprehensive as its name would suggest. However, a good dictionary is much more than the sum of its parts. A good dictionary provides definitions that are relevant to the people that use it, that satisfy their linguistic curiosity and in which they trust. As such, the real test for whether or not The Complete Primary Dictionary really is the ultimate primary dictionary is whether or not children will reach for it the next time they stumble across a word they don’t know the meaning of. It is our hope that they will, and that in doing so, develop a lifelong love of words.